Firstly  a big thank you to everyone that reads and comments on my blog I really appreciate it, I do my best to comment on other peoples blog's when ever I can.
I haven't posted for the last week or so, we've had a wet room installed and although the builder said it would take 6-7 days it in fact took over 2 weeks. Quite honestly it feels as though it took over my life, lots of tea coffee and biscuit's were made (by me).

After the first week I became stir crazy, I'd planned to get lots of sewing done, did I? NO.  I've a king size quilt almost finished and  I want to machine quilt the the border, it's something that I've never done before so what an opportunity.  The plan was to machine quilt a cushion cover first then when in the flow, machine quilt a small quilt (I'd made the top for before my holiday). Then there would be no stopping me straight onto the king size quilt border. Everything was going great with the cushion when the builders said the powers going off for a couple of hours, that was the end of that, a cushion cover half finished the king size folded on a chair waiting and an almost finished small quilt, hand quilted instead .  Oh well! After reading Jan's comment I realise I should have said it was all worth it! And we are much cleaner and smelling sweeter!

Friday I left the builders here and spent a lovely day with Rachel shopping in Cambridge, can't call it Christmas shopping as we didn't do a lot of that. We spent ages over lunch, she tried on dresses and I bought a new coat 3 sizes smaller than I would have bought last year! I also found out that Rachel reads my blog, Mmmmm. It does not bother me, but I've been told that if I join face book, she wont be my friend. I discovered she reads this blog whilst walking through the furniture department of John Lewis (my favourite shop) we sat in a snuggler I said 'Kate has one of these I think, Jacqueline (Rachel's Godmother) is knitting her some cushions for it', 'Yes I know' said Rachel....... You've been reading my blog, yep I wanted to see who your holiday pictures James tweeted about them so I thought I'd see who your friend were while I was there. I told her that from now on I'll blog about her and may even put pictures of her on here.

Everyone is weather obsessed here at the moment, if the TV or radio is on it's all about snow. I like the snow for the first day after that I want it gone, so far my part of the UK has escaped but it's due anytime, but even without snow it's very cold, so I thought I'd take a leaf out of Gina's book and get organised and do some cooking. So it's  a beef casserole for dinner tonight and I plan to pop a few dumplings on top as long as the suet isn't out of date, must go and check that! If not I'll slice a couple of potatoes on top! 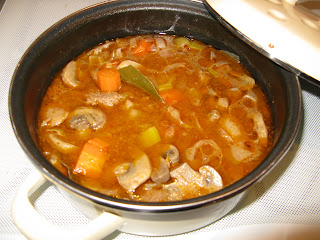 I hope the snow doesn't come until Wednesday, tomorrow Jacqueline, Diane and another friend are due to meet for lunch, snow could stop the plans as I live quite away from them and it means driving down winding country lanes, not sure Jacqueline's other half would appreciate me staying if we get snowed in, until the thaw!!!!!! Plus we are going to the home of Wilkinson's Jam in Tiptree and I would like to buy a couple of presents in the shop.

Last week Christmas dinner landed in the garden, but flew off again before I could measure it to see if it would fit in my oven, another downside was it wasn't oven ready....... So looks like it will be the usual Turkey Breast for us then. 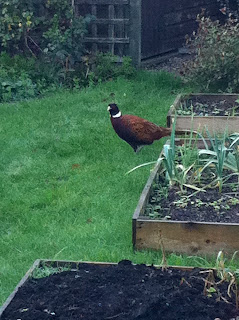 Next post : I promise pictures of finished quilt.
Posted by Miriam Weaver at 17:09 5 comments:

I've put some of our holiday photo's on the side bar under the title Arizona and Nevada.
Posted by Miriam Weaver at 23:03 2 comments:

Wednesday I went to a Kantha workshop with Libby Smith, it's the first time I've ever done it, I have some good samples of the stitches for when I need reminding! 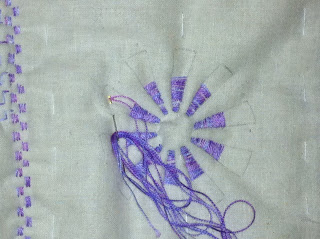 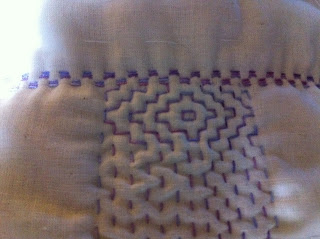 Friday, I was up early to catch a train to Norwich, it was the start of  two brilliant days with ERTF. Twelve of us spent Friday firstly at the Norwich Cathedral Broiderers', we were shown the new project's that they are working on and a repair project that they have just completed. After lunch in the Refectory, we took cabs to  Carrow House, a textile and costume study centre. I was particularly interested in a piece of work from 1900 by Lorina Bulwer, it's one of those things that just stays with you. The curator was really very helpful and chose textiles that she thought would connect to the subject of the ERTF conference Concepts and Meanings. We had a lovely time there and Gina was a good sport when we suggested that she try on a Victorian hooped skirt and a Norwich Shawl!

Saturday was the conference in the Dragon Hall Norwich, there were four speakers two in particular were really brilliant a textile artist Debbie Lyddon and Les Bicknell a book artist.  By the time I was sitting on the train on the way home my head was full of ideas, the speakers gave us such a lot to think about a really worthwhile day.  Saturday  was  the launch of the second ERTF juried  exhibition which will be held at Dragon Hall, I have ideas already!!!!
Posted by Miriam Weaver at 19:08 6 comments:

Boy, How Wrong Can You Be?

Why is it everything is going along fine, then BANG??????

My brother called a while ago to say that he'd received a phone call,from the wonderful estate agent (that's said with a bit lot of sarcasm), the people that were buying Mum's house have a had a problem with their buyer and  have had to pull out of buying our place!!!!! I know it's not a major thing in the big scheme of things but I was hoping that we could have everything finalised before Christmas, I think it's called moving on...... not that I want to forget my Mum, I never want too, I just want this house thing over with. I realise that it's all not that long ago, but the house is just there and I don't want to have to keep going back there, it's no ones home anymore. I have never had an attachment to the house it was just where my parents lived then my Mum lived (it was never my home).

This blog sounds like I'm all whingeing but I'm not. It's just that if I didn't write this down I might scream or cry, so thanks for listening. I feel better now.
Posted by Miriam Weaver at 18:26 6 comments:

It wasn't All Food and Drink, Honest! 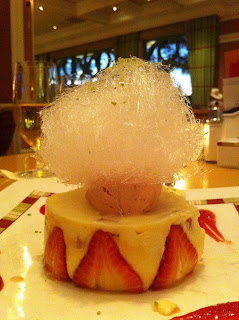 Desert on the first night..... we shared of course! 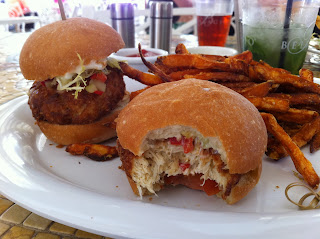 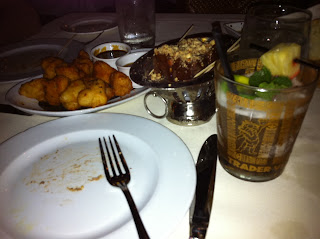 I cant remember what this was, but it must have been good! 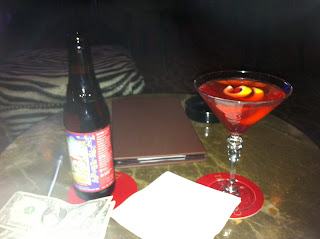 The infamous Cosmopolitan.......... well one of them.
As I said it wasn't all drinking and eating, last night I went to have the first weigh in after the holiday at Slimming World. I knew I had been reasonably careful but I can't say I was confident, I thought that maybe  I'd gain at least 4 lbs. What a relief I'd only gained 1/2 lb, it must have been all the walking we did.
Posted by Miriam Weaver at 15:12 4 comments:

Well I'm back from my holidays!
Looking on Emma's blog yesterday I saw this. Splash of Colour

This morning I thought I need a bit of Colour in my life, go on be honest don't we all? Take a look at Emma's blog it really cheered me up.
I've used this image that I took on  holiday in the summer when we visited Aberglasney Gardens. 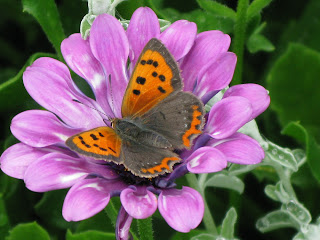 As soon as I manage to catch up on everything emails blogs oh and ironing I'll post some more pictures of our Arizona holiday, I also have a few videos not sure how to load those on here yet, make take me  a while but it's good to learn new things!!!!!! I think I have to register with you tube first!!!!!
Posted by Miriam Weaver at 13:05 1 comment: