In the last few weeks of October it seemed as though my feet didn't touch the ground, Michelle who works for my husband got married. She is also a friend of our daughter so she was invited too, it was the most amazing wedding. It was held in at the Buckingham Railway Centre, Quainton, they were married on the platform and there was a steam engine running along a track for the guests to ride on after the photographs were taken. I don't think I've ever been to a wedding were everyone laughed from the start to the end, everything was fun even the singing of 'I'm a believer'  after the signing of the register,  had us all jigging about. I'm sure if their wedding was anything to go by they will have a very happy marriage! Oh! I should say that the Railway theme was very apt as Dave and Michelle work for a Rail Engineering Consultancy. 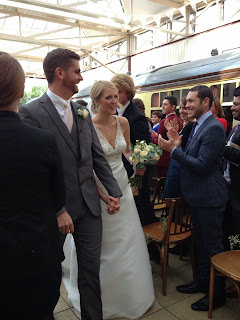 Two weeks later and we were in Michelle and Nicks company again for the company dinner and dance, at a hotel in the Forest of Arden. I managed to wangle a trip to the Cotton Patch while in the area, well you have to take advantage while you can, don't you? I bought the fabric for a baby quilt, I'm going to be a 'Great Aunt', we also managed to fit in a quick visit to Kenilworth Castle. 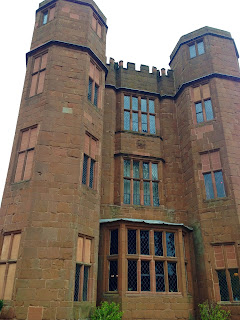 I completed this crochet blanket a while ago, it was just a matter of sewing in the ends. It did take me over a year to finish. I enjoyed doing it but it did drag on, as I seem to have so many projects on the go. 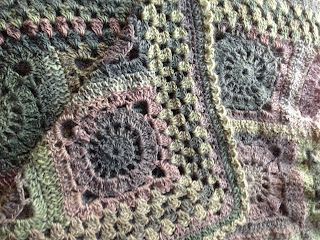 Last week saw the opening of the third exhibition of Bridging Waters, after this exhibition finished we were expecting the work to be returned. But an exciting thing  happened, the work is going to be shown at another gallery.  The work will be staying in Canada for a few more months, watch this space…….

Last Saturday was the exhibition of the City and Guilds classes, I had two pieces of work to show, the table runner and a bag which I didn't finish until the night before. 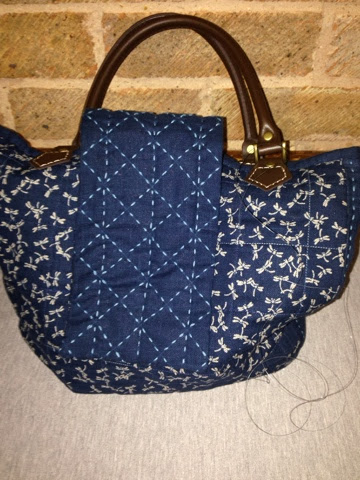 This isn't a good photograph I will do a better set for the next post, I have to say I'm pleased with it, at last I've made something I know I'll use myself. The exhibition had lots of visitors, and the work exhibited by the students who have finished their Certificate and those that have finished their Diploma was amazing.