Up Downs and an Up

I'll start with an up, the city and guilds classes have finished until October (that's not the up) but one of the last lessons was dyeing, something I enjoy. A while ago I dyed some silk scarves and sold a few at the last Material Girls exhibition, but  was left with some that I wasn't happy with,  a good opportunity to have a play with a new idea, using a slinky as a resist. This isn't my own idea it's something I'd seen done by Jenny and asked her about, I think it was a success and I've sold one of the scarves already! 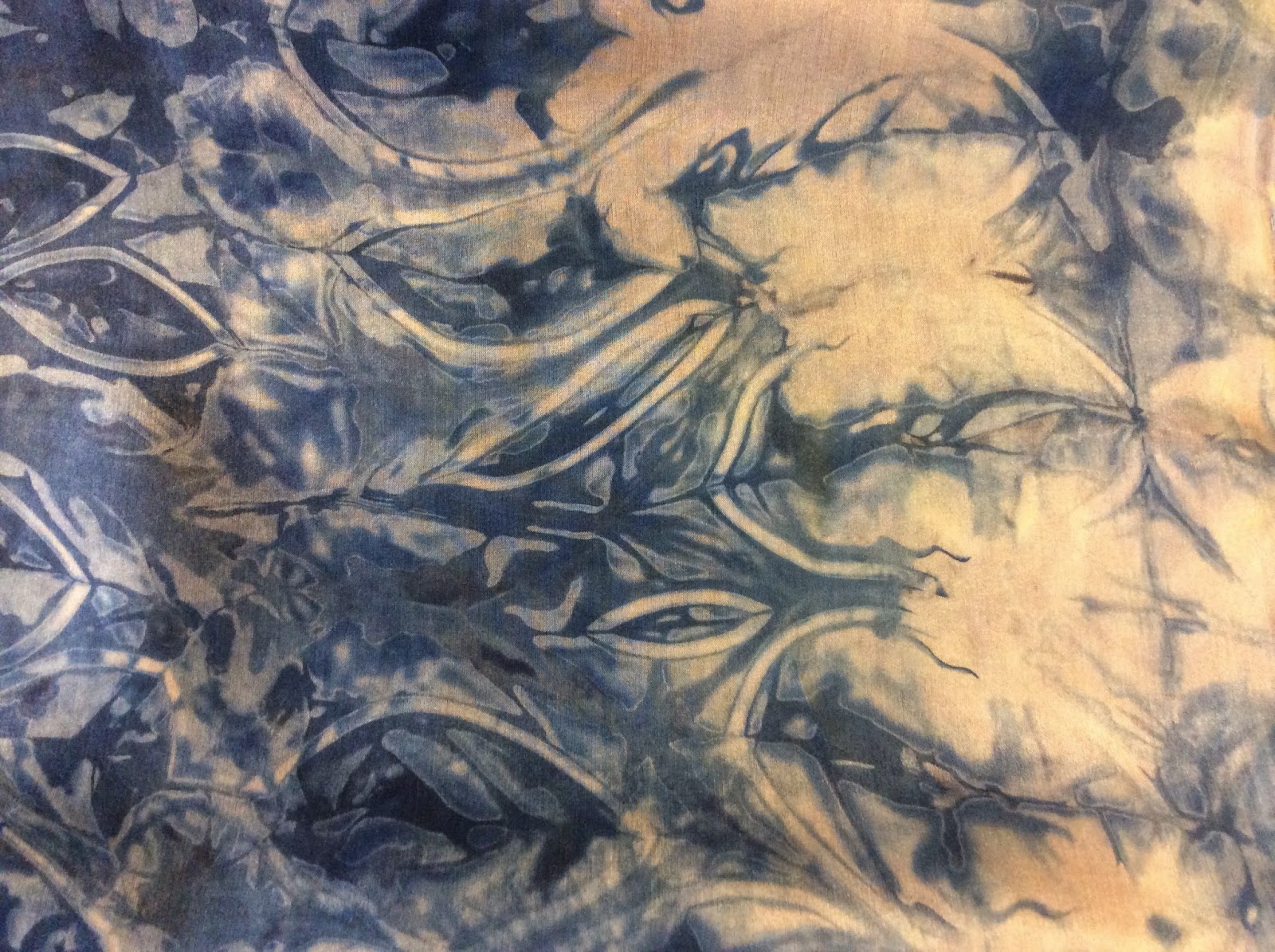 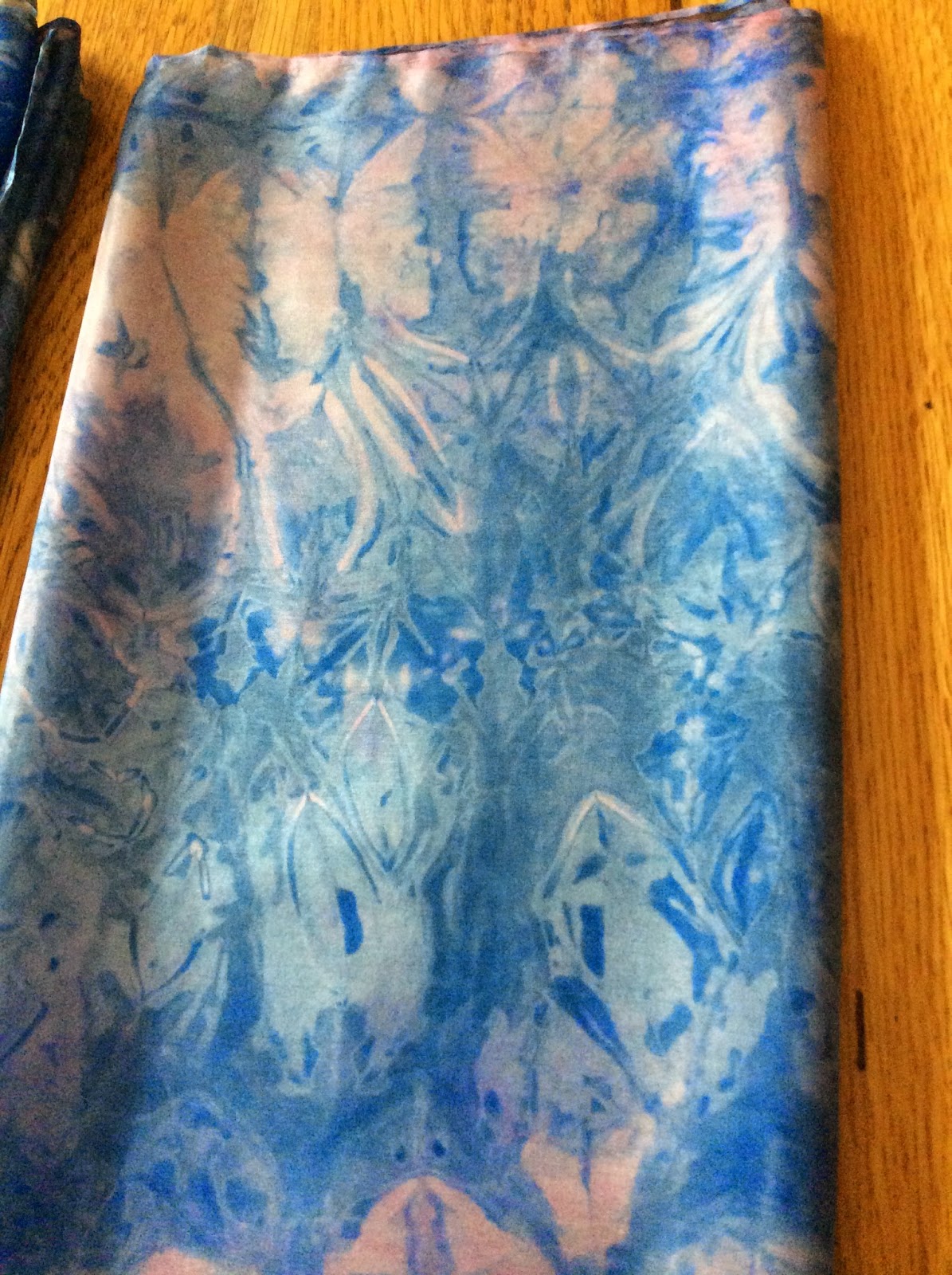 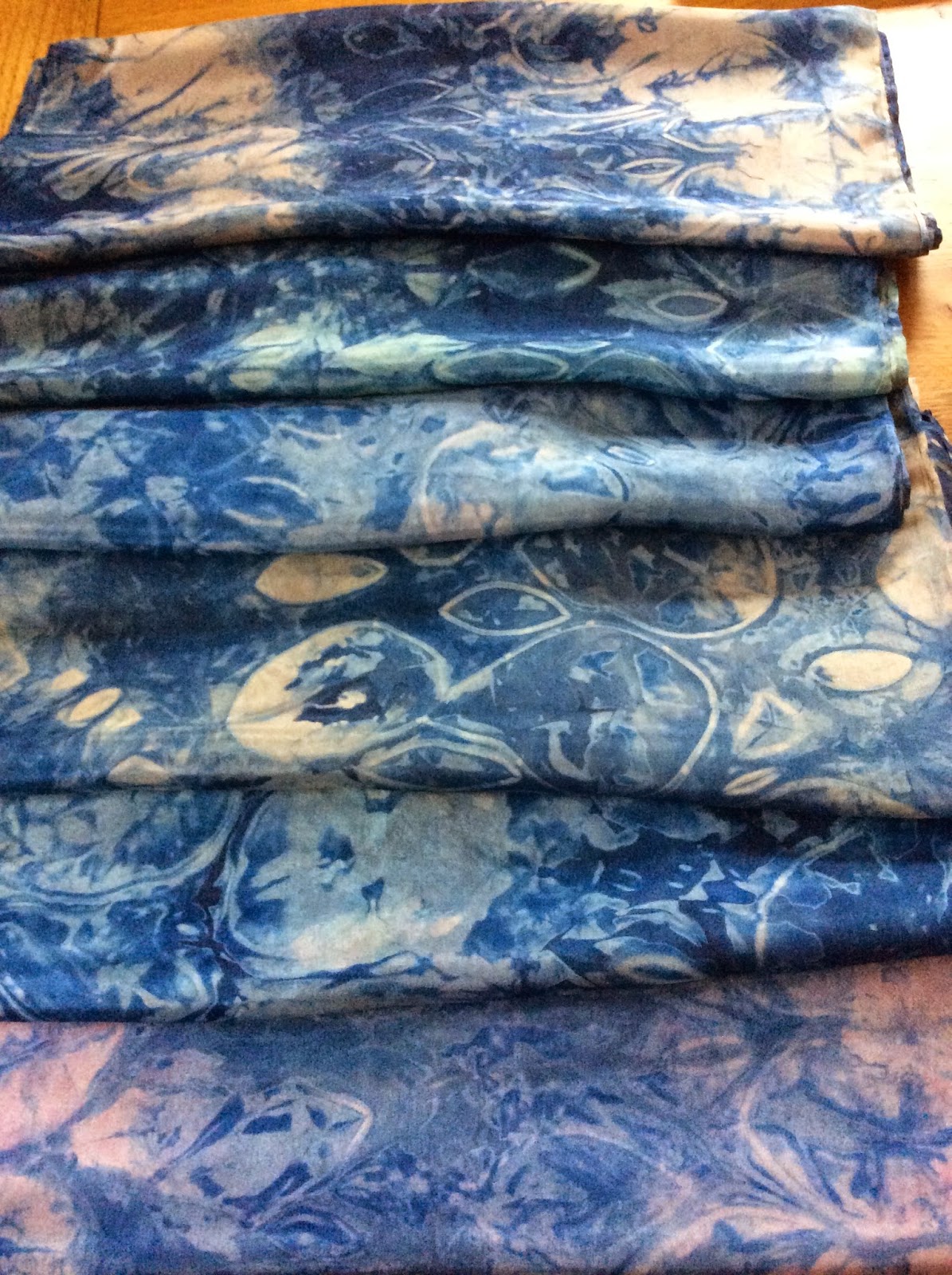 It was very hot day far to hot to take Betsy out for a walk before the  evening cooled,  even then only a short walk around  the block, I'd taken her earlier in the morning for a run over the fields before the day heated up. Dave was home that Monday, so we took Betsy out together, I slipped on my flip flops (not my usual foot wear when walking) and off we went for a  leisurely stroll. We met a friend with his two Schnauzers and stopped for a chat. 'What a lovely evening' I said as we passed a house and heard the children playing in their garden, it was just about then I tripped and landed on the pavement, my glasses skidded across the rough ground,  not before the frame had cut into my face. To be honest I don't really know what happened, several people coming to help.  Betsy who usually goes nuts barking when any strangers approach sat there like an angel. I just wanted to stay laying on the floor but Dave insisted  'Let this young man take your other arm'  They both helped me up, which wasn't easy as I was clutching a hanky to my head as apparently I had a bad cut (at this time I didn't realise how bad, I was just doing as I was told). A short walk we were home and sorting out someone to have Betsy, Dave insisted we needed to go to A&E (really that bad?) as most people know a visit to A&E involves a long wait, so Betsy was at a friends for the night. We arrived at 9.20 pm and after an hour or so I was seen by a nurse who said ' that'll need gluing, don't leave before your seen it could get infected'.  So we sat and waited until 1am. with others who moaned, then the group of youngsters who came in on mass with a friend who'd sprain a foot playing a sport and found the whole thing amusing. If your in a better mood and not bleeding and starting to feel the pain of it all, it's a place to people watch. The doctor I saw gave me good and bad news 'Good' not deep 'Bad' as it was along the line of my eyebrow I needed to see someone from the Maxillofacial department, it should be glued! 'Oh just glue it' I said, I just wanted it over. By this time I could really feel the pain in my left leg, and when I looked a bruise and swelling was developing nicely from my knee cap down towards my ankle....... I just wanted to get home to my bed and take some painkillers and cry! After some persuasion from Dave I agreed to return the next morning where a doctor cleaned the cut and put in five very neat stitches, here's the gory bit. 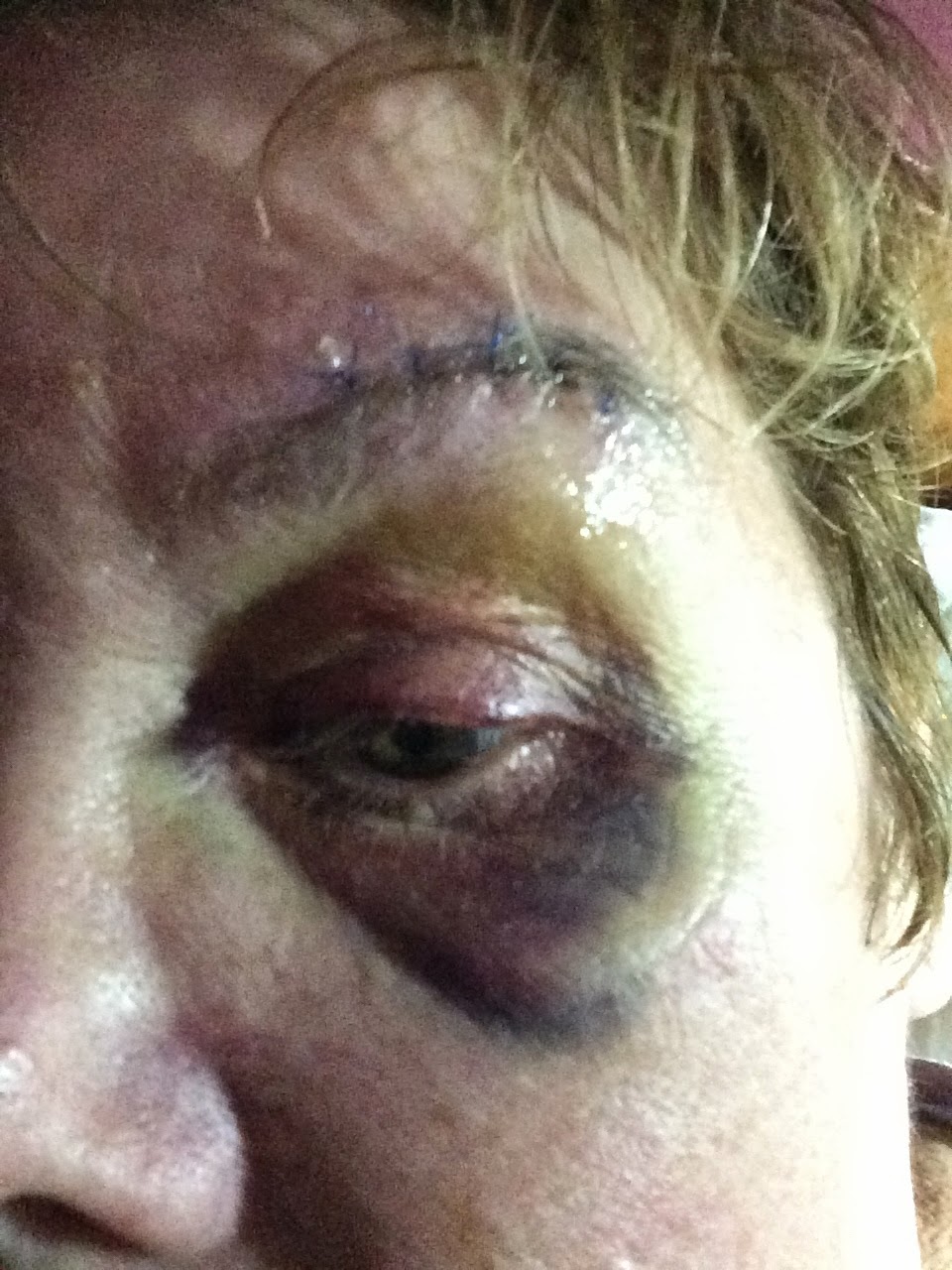 Anyway the stitches are out and its healed very well my sister in law tells me, she's the one that removed the stitches, handy having your own personal nurse. Unfortunately I can't say my leg is healing as well after two weeks the black eye has almost gone but the bruising on my leg is still there and my knee cap is painful to touch. Another week and I have an appointment with the GP, so if it's not better or improving by then I'll mention it. Tomorrow I have an appointment to with the optician, to pick up replacement glasses, at least I'll be able to see without looking through a haze of criss cross scratches. Mind you as a weird textile person the colours have been amazing, although  I wasn't keen on the textures!

OMG if this had happened two weeks earlier I would have been wearing a black eye to match my outfit at a wedding, and yes I was wearing navy blue. It was the fifth wedding in a year, that we've been guests at. Who says weddings aren't happening? And each wedding we've been to has been special and very lovely in their own way, some have been no expense spared and others have been more modest but as I said everyone has been beautiful with lovely people.