We've been on holiday in Ireland  a small village (not sure if it was a village no shop NO PUB) but still a great holiday! We rented a house in  Arthurstown Co. Waterford,  a 30 minute drive from Wexford when taking the car ferry from Ballyhack to Passage East.

The weather was kind, the people very friendly, the scenery beautiful and the food, well totally wonderful. I'm not a lover of fish but in this part of Ireland it appears a lot on the menu, never one to shy away I jumped in so to speak and ate a lot of delicious fish cooked in various ways.

The first day after an over night ferry from Pembroke to Rosleare we had a wander around Waterford, as I said there wasn't a pub in the town but a short distance away is Dunbrody House, they have  this year opened a pub called 'The Local' to fill the gap when the pub in the town closed. The Local is only open from Thursday to Sunday and serves a very limited menu but boy it was delicious food. We also had a couple of meals at the Champagne and Seafood Bar in the main house that was amazing!

Here are just some of the things we did, a drive to The Hook Head Lighthouse and a stop at a couple of the beaches, we were the only people on the beach, not warm enough for skinny dipping but the idea was there! We sat in the warm sun after a lovely lunch in the Light House restaurant, I could have sat there all week just watching the sea crashing against the rocks, so restful.  Mind you I wouldn't want to be sitting there when the Irish sea gets really rough.


I did become a bit obsessed with heart shaped stones on the beaches, Dave called a halt and said if we carried on we wouldn't be able to get on the ferry coming home in fear of it sinking from the weight in our car, spoil sport! I had hoped to find some sea glass but didn't maybe another time another beach...... 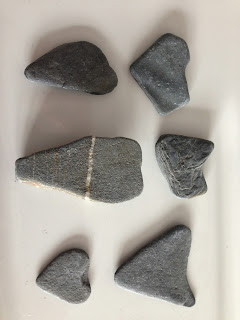 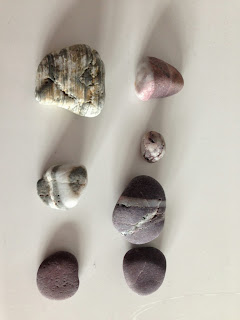 As a break from beach combing we made a visit to Tintern Abbey, it's such a shame  the visitors centre  was destroyed by vandals, who robbed it then set fire to it. Yes, it happens in the most beautiful parts of the world, and to give the staff at the Abbey their due they are struggling on whilst the centre is being rebuilt. 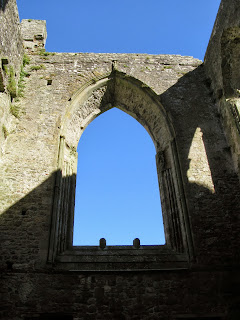 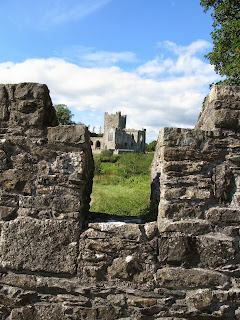 Another day we visited the Famine Ship at New Ross, a very interesting visit with a guided tour of the ship and two woman who played out the parts of a woman who travelled steerage and a woman who travelled upper class. Boy what a life those woman had. After that disturbing and touching visit we  needed (I needed) a touch of the textile world.  Strange there just happened to be a 'Ros Tapestry' the history of the Normans in Ireland in stitch. An interesting exhibition which is still a work in progress.


Another day it was off to Kilkenny and the Design Centre, some lovely things there and a few must haves, six pottery mugs a jug and a sugar bowl, well they are beautiful and you must support the artist especially when you have visited their studio, mustn't you? Shame, Dave didn't feel quite the same when we popped into the Goldsmiths and then the Silversmiths studio's, but you can't have it all. On the same site is the National Craft Gallery there was an exhibition called 'Future Fashion' I only took a couple of photos ( I did ask first) the work was beautiful, but all I can say is this is a fashion I will not be wearing in the future! But I did admire the skill of the workmanship.

On our way back to the house after the Kilkenny  we passed through Inistioge a  small village  used for scenes in the films 'Circle of Friends' based on the Maeve Binchy book  and 'Widows Peak'.

You can't go all the way to Waterford and not visit the  House of Waterford Crystal, we did the tour and saw how the pieces are made from start to finish. We had decided to also go and see a glass engraver who has a studio in Waterford, we watched him work for a while and then chatted to him about his work. Dave had already spotted a piece of  work  he wanted to buy, Sean Egan was employed by Waterford Crystal and  made a beautiful piece of work after the  9/11 tragedy its called Miracle on Stairwell B. He presented the work to the FDNY, there are several variations of this sculptures  one in the Waterford Showroom and another in Sean's studio. Sadly after working for Waterford Crystal for 35 years Sean lost his job and opened his own studio. We did buy a piece of Sean's work which he signed for us, he asked what we would like him to put on it, just his name was enough on such a lovely piece.

No we didn't buy the clock thats in the Waterford Crystal showroom, we bought a square piece with butterflies engraved into it.


Now we're home and looking forward to our next break away.