Well it was definatly a challenge, trying to keep Betsy away from the bits of plaster! Luckily the plasterer liked dogs. At least it's all finished and the living room is usable, I cant say the same of my work room, all my 'stuff' as Dave calls it is in boxes and stacked in another room, ideal oppertunity to sort out! But really I should be working, I've a few projects that need to be completed by October! Next it's painting, that should be fun keeping Betsy out of the paint pots!

News about the hanging 'Liberation of the Heart' see image in sidebar, last week I found out that it was in fact still with the gallery. I phoned and spoke to the lady at the gallery, she said like me she'd been contacting the person (who shall remain nameless) without any response trying to find out my address, I spoke to the gallery on Monday and by Friday it was delivered, hooray!!!! From now on I'll be careful whose group I exhibit with. Now it will be hung in the exhibition of Material Girls Work at Craft Arena.
Posted by Miriam Weaver at 20:49 4 comments:

Last week we were in France for a weeks holiday, the weather could have been a lot better, I've been told it wasn't that great at home either.  It wasn't quite as we had planned, no long lunches sitting outside or lingering over coffee watching the world go bye. No, that's not strictly true we did have a few of those but not as many as we'd imagined.  We still had a great time in Normandy, the cottage was beautiful, in a great location and we could walk to the restaurants in the evening in about 10 minutes, always with an umbrella. We did all the usual things that you do that part of France, the Beaches, Pegasus Bridge and The Bayeux Tapestry, which all of us textile people know is NOT a tapestry but an embroidery, I'm glad I got to see it, it's something I've wanted to do for a long time, that day it was torrential rain so the place was heaving, we didn't spend lots of time standing and admiring this impressive piece of work, and we didn't walk around Bayeux and see the rest of the town because of the weather, shame but we may get to go back sometime! 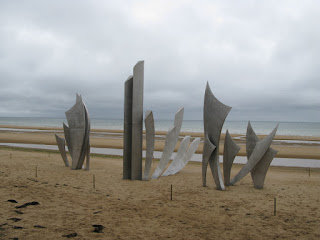 We got on very well with or  poor french, the people were kind as we struggled through menus, Dave did french at school( I don't think he'd like it if I said how many years ago) I only did one term.  As we've been to France a few times recently we must try to learn the language, that's something we talked about on holiday. Another thing to add to the ever growing list of 'must do's'

On Sunday we collected Betsy, she's now 11 weeks old and what a bundle of trouble she is! She's keeping us very busy, I'm now up at 6 every morning as Dave doesn't have time to sort her out and catch the train on time, and this was one of the conditions when I said I'd like a dog. 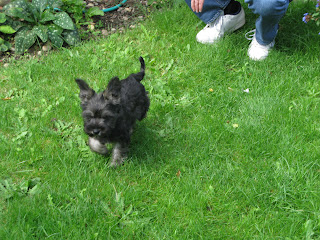 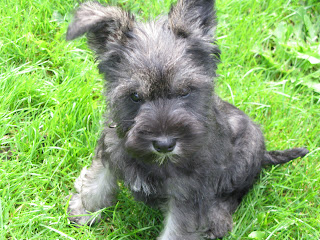 There is not much time during the day to do much other than take care of her, does this last? Please don't say yes. No it's not that bad, in fact so far she's very good, she cries for a while when she's put in her crate but goes through the night dry, she is absolutely bursting to get out in the morning when I go down to her. The first day she would only sleep on someones lap but now she's sleeping during the day on the mat and Monday she went into her crate and slept while I did the ironing. Yesterday she came  to Slimming World, I lost 1/2 pound not bad considering the French food and wine consumed, then we went off to Material Girls, she was very well behaved and is now an honorary member, hopefully that means that very soon she'll let me get on with some stitching.

Everything happens at once doesn't it? This weekend the plasterer is coming to plaster the ceiling in my workroom remember, the leak? Foolishly we asked him to re plaster the ceiling in the living room and the hall stairs and landing, they have a very 1970's swirly design that was here when we moved in and have always said we'd get changed, we were mucked about by one plaster that time slipped away, we hoped to get all this done before we got Betsy, so this should be fun!

Monday I'm going with Chris and Diane to Craft Arena to set the Material Girls Exhibition, that will be the first time Betsy will be left on her own for a couple of hours. I have been putting her in her crate while I go upstairs, I'm upstairs now sitting on the bed typing this, she quiet in her crate, so maybe tomorrow I'll do the same and try and get some work done on a project that I must finish by the next Material Girls meeting!!!!!

I've a feeling life will never be the same.
ps, I have good news about the missing hanging, no time to post about it now someone needs attention.
Posted by Miriam Weaver at 08:40 7 comments:

The garden is  looking good despite the summer weather doing it's best to sabotage my efforts, in this part of the country there's either a complete lack of rain or a deluge and very little sun. 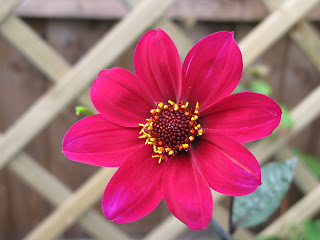 The dahlias are doing well I think it's the 3rd year I grew them from seed and still have 3 plants in the garden, I don't do anything to them except dead head them on a regular basis! 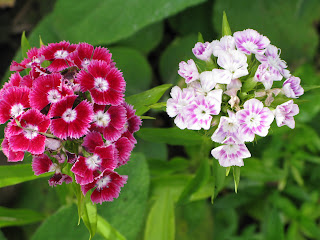 Can't remember what these are called but I grew them from seed too and they come up every year. Are they Sweet Williams? 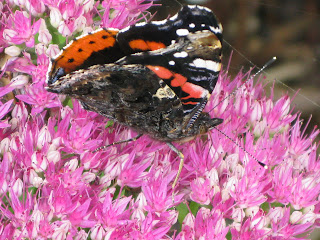 The wild life  seems to be doing well too, this Red Admiral fluttered into the garden landed on the flower then took a liking to my jeans, I tried to get a photo but by the time I'd got it in focus it had flown off again! 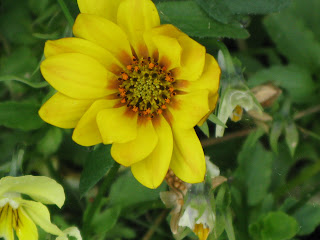 I'm into brighter colours in the garden this year and tried to introduce oranges and yellow's instead of the pinks, blues and lilac's that I've had for years. After fluttering around the flowers and not landing long enough for a good photo the butterfly posed for ages on the marrow plant, the antennae are fascinating (click on the image to enlarge). I swear it sat there for so long, I got fed up and I fluttered off! 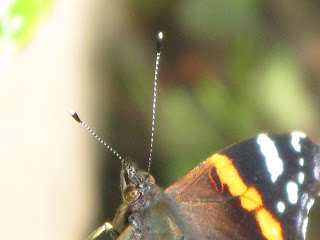 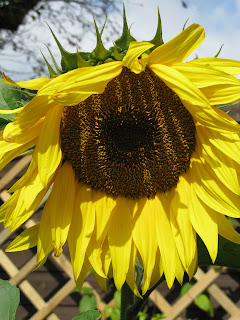 These  Sunflowers are not exactly where I would have positioned them in the garden but I didn't plant them, they appeared with a few others around the garden, it seemed a shame to pull them up so I've left them. I suppose they were planted by the birds, at least they fit in with the colour theme! 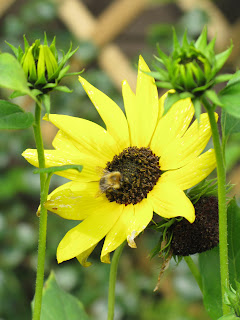 The vegetable garden is doing well too!


The tomatoes are doing well they are hanging like grapes, I've removed most of the leaves hoping that if the sun does shine they get as much light as possible to ripen them. I get two or three red ones every day, but I think I may have to dig out a recipe for 'Green Chutney', a few years ago when we were in Virginia we had fried green tomatoes, maybe I'll find a recipe for that as well, it was delicious and as 'Fried Green Tomatoes at the Whistle Stop Cafe' is one of my favourite films I had to give them a try. 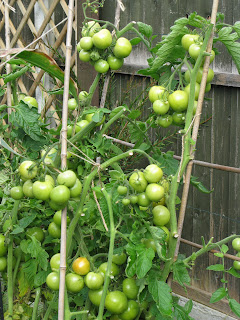 And the plastic bags, well I been dyeing  fabric and  I might use the bags! Well that's a tour around my garden on the 1st September I wonder what it'll look like on the 30th? 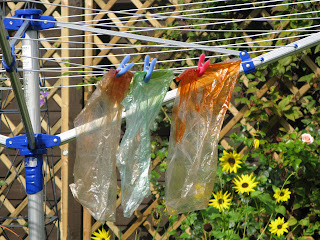