A week or so ago I entered a competition to win two tickets to 'Unravel' through the Yarn to Knit blog, it's  a site that I've been following for some time, I'm really pleased I won. Rachel and I are off to spend a day browsing and buying lots of lovely wool. So a big thank you to Yarn to Knit.

When I opened the curtains in the dinning room this morning, the sun was shinning and the daffodils looked lovely, it made me feel bright and cheerful. The feeling has carried on all day! 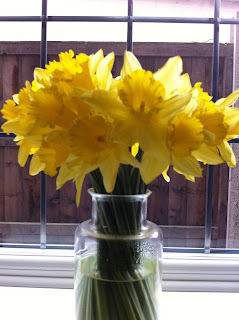 After breakfast it was off to Lady Bugs, Diane had made a couscous and lemon cake delicious, she also made a scan bran cake, that one I'm not 100% sold on, an acquired taste I think, but thanks Diane for the low sin cakes. On the way back from the group I drive past a garden center, I dropped in to see if they had a plant for the window sill where the vase of daffodils are at the moment. As a consequence I now have snowdrops in the front garden, 20 potatoes chitin on the kitchen window sill, two scented candles and a plant for the dinning room! Next time I should drive past, but I wont, I think this will we a regular drop off. I met another of the group inside she was buying potatoes too! In the car park I met Pat from the group she was going in for a coffee, she suggests that we all go for lunch there in a few weeks time after class, it's obviously a regular haunt since we moved the meeting hall. 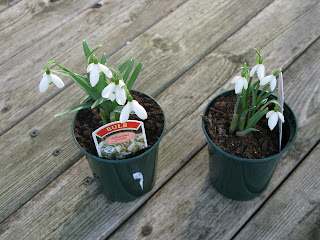 When I got home I blocked the cardigan/jacket, the colours don't really come out well in the photograph, it needs a kilt pin to fasten it. I'm not sure that it will fit Rachel it looks too big, but she's coming home on Sunday for Vince's birthday lunch, (that's Dave's dad) he'll be 88. So she can try it on then, or maybe Dave can take it to work with him to pass on (they work for the same company). Rachel gave me some brilliant news yesterday, they have moved offices from St. James's Park to the South Bank near to the Tate Modern, on a lunch time walk she discovered I KNIT LONDON, not such great news for Dave, I think I might send him along occasionally to pick up the odd ball of yarn for me! 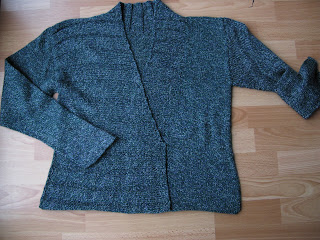 A few things crossed off the list in the last few days. Two pieces of work were delivered this morning to Material Girls so it can be sent off with the rest to Jersey. Take a look at the Material Girls Blog or Website to see all the work that will be in the 'Primarily Colour' exhibition. 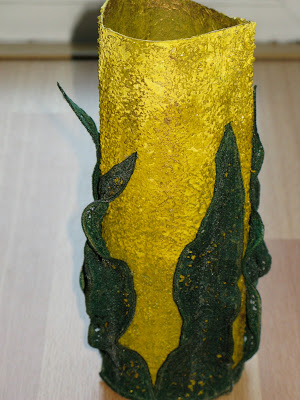 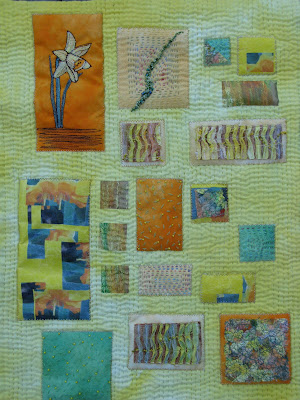 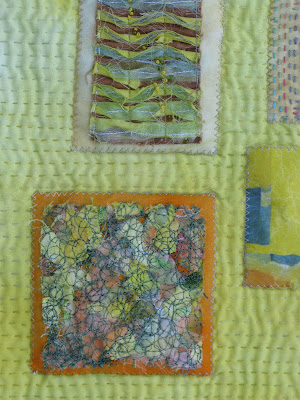 I have also finished Rachel's cardigan that I mentioned in the previous post, just needs to be blocked or whatever the word is? Before I can take a photo and post here!
My mood is improving I think it's because I have actually managed to spend sometime outside in the garden. It really does need whipping into shape, it was let go last year and needs a lot of attention. We have big plans to make a proper vegetable come flower garden, at this stage they are only plans. But you never know, our garden isn't large by any stretch of the imagination but we are happy with it. At one point I longed for a larger plot, then remembering the garden we had when I was growing up and how much hard work that was, I'm happy with my lot, or should that be plot? It's great to spend a few hours in the garden working then sitting back and enjoying it!
Posted by Miriam Weaver at 18:56 4 comments:

Thank you for the comments on the last post, it's nice to know that there are people out there who actually read this!

I can't believe that this is the last week of Silver Pebbles Splash of Colour take a look there are some lovely cheery photos on here to brighten up these dull days. It would be great if Emma does this again next year, but I can imagine it's been quite a lot of work, it has been appreciated, so thanks Emma. I popped into the garden this morning to find something to put on the Site not a lot there apart from weeds. There is more colour indoors with the house plants.

Not a lot of creative work going on here at the moment, I'm trying to get a few things finished before I start on anything else. The quilt I started way back when...... ( I've looked back in the blog, Oh dear, I started this quilt in June 2009, I don't believe in rushing things, hahah!), is at last on our bed, I'm really pleased with it. Now I'm knitting like a thing possessed to get a cardigan finished for Rachel, then the way will be clear to get the other projects underway. I need to prioritise, everything has deadlines at the moment, baby due dates and exhibition deadlines,  I need to plan, plan, plan!!!! 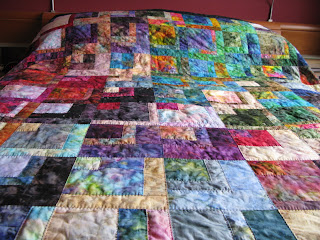 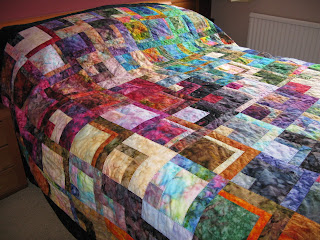 The scrap quilt still needs to be hand quilted, I'll work on that when I go to classes, see the planning has started.
Posted by Miriam Weaver at 15:23 4 comments: