My plan for this holiday is No Chocolate!!!!
Hope you all have a lovely holiday whatever you do.
Posted by Miriam Weaver at 09:57 8 comments:

As promised the recipe for the cake, it's from a book I've had since 1985. When the children were small the programme was on TV and I remember watching it and cooking lots of meals that they demonstrated.

75g margarine ( I use butter)
25g lard (I don't use this I add extra margarine or butter)
2 large eggs
125g soft brown sugar
325g mincemeat
190g self-raising flour
a little milk if necessary ( I sometimes use sherry, brandy or whatever I feel like adding)
I find that this cake freezes well, it will keep in a tin for a week, I can't say if it keeps longer for obvious reasons. If you do make it I'd like to know what you think, I think it's OK for an everyday cake it's easy to make.

My back has improved, thank you for your good wishes, especially Sharne, who emailed me as soon as she heard about it, she offered to help out in any way she could as she's on holiday. That was really so kind of her, Sharne is one of the busiest people I know, so it meant so much! I'm still not going to the gym, but I don't need much of an excuse not to go there! When I get the dog I'm going to give up the gym altogether, I think walking in the fresh air will be so much better for me. Beverley I think you could have been right, the idea of a pony troting around the living room made a dog seem much more appealing!

It's just as well my back improved, since Saturday I've spend an awful lot of time sitting in a car as a passenger and as driver, Saturday it was the ERTF AGM and conference, it's nice to go to these events it gives us a good chance to catch up with like minded people from the region. The venue was very impressive Girton College, Cambridge and a very interesting speaker. Then due to events at the AGM  an extraordinary committee meeting was called, everything was resolved so all crisis over and things will continue running smoothly as usual but it did involve a round trip of 141 miles. I'm no longer on the committee, but three of us were invited to the meeting as we were the founders of ERTF. I'm looking forward to seeing how the group moves on and evolves, which reminds me I must amend my profile on here.  Many things are changing at the moment the textile group I belong to The Material Girls is going through a change. A few  members have decided that now is the time for them to move on, it will be interesting to see how the group changes, there are a few interesting things in the pipeline for us, we'll be exhibiting in a new venue for us later in the year and in 2013 we'll be exhibiting in Canada, I'm really excited about that. Who knows I might even get to Canada for a holiday, we do have some air miles saved what better way to use them?

Mum's house was finally settled two weeks ago, it all went through with no glitches. So far I've resisted going to have a look at the house. My brother has driven by, not so easy as the house is in a cul-de-sac. I did drive close by yesterday on my way home from the Material Girls meeting, but resisted all temptation.
Posted by Miriam Weaver at 14:29 5 comments:

It's been so long

....... I've  looked at my calender to see what I've been up to since my last post! In fact it's been more like what I've had to cancel,  I've had a bad back for just over three weeks now. According to my GP I've been lucky, previously getting over back episodes (if that's what they are called) in a week it's likely to take 8 weeks to recover completely.  For the first week I had trouble sitting or standing for more than 5 minutes at a time and in fact I spent the first week totally uncomfortable. During these weeks I  did finish reading a book that I started last year and started reading a book that Rachel gave me a few weeks ago. Dave says that since he's seen me reading 'One Day' every one seems to be reading it on his journey to and from work. 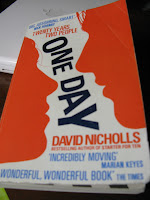 I've also knitted another baby cardigan, when I've got the buttons sewn on I'll put photos of both up here. Rachel's scrap quilt is finished with the binding on I'm really pleased with it and next time she comes home she can take it back with her. I've also spend far to much  time watching day time tv and films. I had to cancel coffee with a friend twice and both Quilting groups I go to twice. Thankfully I can now get out and about again and life has started to look up, Thursday I went out with a friend for lunch at RHS Hyde Hall, that seemed to be a less risky option than the day out in London that we'd been planning for a time. I'm so glad we didn't book the theatre tickets that we'd talked about doing!  Friday my lovely friend Sheila came to visit, we spent a nice afternoon chatting having lunch, and she gave me  this selvage pin cushion that she'd made, how lucky am I? So it's not been all doom and gloom. 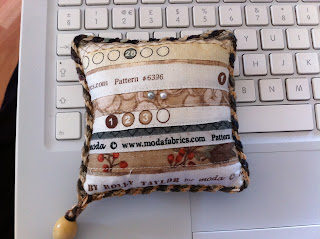 Our garden is going through a total re vamp the raised beds are now in position and some vegetable's have been planted. It's a small garden and we are trying to get the most out of it, at the moment it looks a total mess. As things always go the week my back went we had lots of things delivered for the garden, things are going slower than we planned but we will get there. Next weekend a skip is on it's way, then things should start to improve. A week or so ago the Camellia was looking fantastic! It still looks good even now. Thankfully the shrubs and plants that we moved from one side of the garden to the other seem to have taken and the clematis are starting to climb up the new trellis. 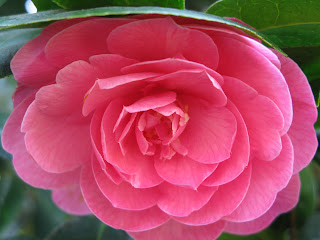 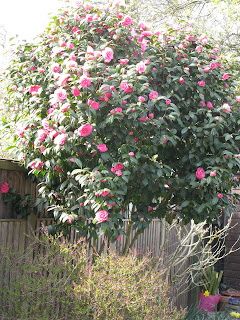 The other good news is Dave has agreed that we can get a puppy...... I'm not sure if I've blogged about this previously, but he'd said before "that if a dog moved in here he'd move out".  With very little persuasion he's given in. We'll be looking to bring the new addition into the house in September as until then we have too much going on to devote enough time to a puppy. I'm thinking of a small dog maybe a Shih-tzu, any one out there got any tips on the breed we should think about? In an ideal world I'd like a Labrador, but they are too big for our house and garden.

Sorry this post seems to be going on a bit. But another couple of things to say.... Gina sorry I've not put the recipe on yet for the mincemeat cake I'll do that later this week. Thanks for all the comments on my last  post.  Must finish this post now before I get stuck in one position, keep moving is the thing to do!
Posted by Miriam Weaver at 13:05 9 comments: