This is what I've been working on for over a year, not only this,  there have been a couple of baby quilts, knitted items and various other things, but these three  have been occupying my mind. So that's over and now my mind is occupied with the next project, that's how I seem to work. I've enjoyed working on this exhibition, I think that the extra bonus of the wall hangings travelling to Canada to be exhibited with Articulation has made it extra special.

All the Material Girls made a 3 D piece inspired by water. The Mariners Rhyme started to run through my mind.

So that was it, my 3 D inspiration! It just left the problem of how to put it into practice, never one to avoid a problem I set about constructing a jug and glass from threads and a soluble medium. It has turned out not to be  the easiest thing to photograph.   In the gallery it is suspended from the ceiling, the jug is  see through without a backing it disappears into the room. I'm pleased with the overall effect of it  and I'll get a better image of it at some point! (thanks to Chrissythreads for this image)

It was also decided that as our inspiration for the Bridging Waters Exhibition was the River Thames we would each make a Thames Barge, we each picked a name from a hat, all are genuine Thames Barge names. I thought mine was very apt 'London Belle' and decided that it should be a party boat. When I worked in London I did go to plenty of office parties held on 'Party Boats' sadly never a Thames Barge.

The exhibition is centred around  the wall hangings, Articulation took their inspiration from the Bay of Fundy on the East coast of Canada and The Material Girls took inspiration  from the River Thames.  I took  inspiration from the locks on the Thames, I didn't use any particular Lock just an overall impression with a lot of artistic licence.

This stage of the tour ends on Friday. Then the complete body of work will be shown in May at a textile event and in September in Maldon. Then the hangings will be packed up and couriered to Canada and will be exhibited in various locations, I believe that it will be travelling for two years. Who knows I may even get to visit one of these shows???

In the meantime life carries on,  this morning I took a deep breath, took the plunge and changed hairdressers. With everything crossed I went in for a haircut and a colour (I'm not brave enough yet to let the grey show through) I always find changing hairdressers traumatic, I've had a few disasters in the past. And, yes I know it will grow again but who wants to be forced to wear a hat for six weeks until it grows again. Anyway  I'm really pleased and I've found a great hairdresser just 5 minutes away from home and a good price too. My previous hairdresser was a very well known chain and very costly!
Posted by Miriam Weaver at 20:45 5 comments:

For a short review of the Private View of Bridging Waters pop over to here
Posted by Miriam Weaver at 17:37 2 comments:

This morning the Material Girls met at the gallery and just like magic the exhibition was up on the walls, and then I woke up......  I do have to say it looks good. I hope that you get to see the work in the flesh so to speak, always better than just seeing images. Last week at the MG regular meeting the press arrived, with a photographer,  I think the saying goes all publicity is good publicity, well this is good publicity if slightly wrong , well you cant expect everything! Have a look at Chrissythreads to see the article. There will be a lot of images on this and the Material Girls blog on Friday, it's the Private view on Thursday evening and I don't feel it's right to put images up until after that.

Tomorrow I'm having a trip to London with Dave we're off the The British Museum to see the Grayson Perry Exhibition and also to the Crypt Gallery to see a photographic Exhibition and who knows a nice lunch and maybe a bit of retail therapy. The trip to London is no change for Dave as he makes the journey to town every day it just means he'll get a lay in, oh yes! and my company. Betsy gets a treat too she's going to spend the day with her Mum, she loves it!
Posted by Miriam Weaver at 21:14 4 comments: 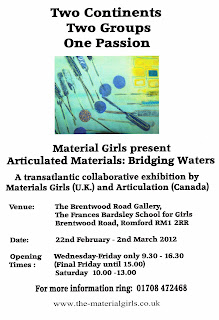 Thanks for your comments!

Lyn I've got my dough proving at the moment, this time I've used my Kenwood. Fiona you said you felt better once you stopped the ear thing that's just how I feel, I never planned to show Betsy, she such a little scruff. I could never manage to keep her that clean, every time she goes into the garden she's in the dirt, but that's how she is and we love her for it, well most of the time.......
Posted by Miriam Weaver at 16:12 No comments:

Not a Lot of Blogging

has been going on here, no excuses or apologies I've just not felt like it. Do you ever feel like that? I have been reading  your post though and commenting sometimes but even that has been a bit patchy. To be honest I think it's the weather, I never used to feel like this during the winter. I noticed feeling a bit down last year and it's hit me again this year too, it's not depression as such I'm just not very enthused about things that I should be.....

I wont bore you with a long post just a bit of a catch up. Over the last few weeks I've made bread NOT with a machine  BUT by hand 3 loaves and 8 rolls, they were  lovely (even if I say so myself) and I'll be making more this week  (well that's the plan).  I've made two more batches of Granola, it is very popular in this house Dave has abandoned his much loved weetabix!

Dave and I decided that maybe a weekend away would be a good idea! Mmm when did we book for? Yep last weekend, Dave thought Suffolk would be nice, I didn't discourage him as I knew there were two fabric shops that I've never been to. Despite the promise of snow we set off on the Friday with the hope that the forecast would be wrong as usual. A detour on our way to the hotel  took us via Bungay and Sew and So's, I spent much more than I should have, but well worth it.

We checked into the hotel and had a great evening meal, at some point the staff announced that it was snowing, mmm! Saturday morning there was a light dusting of snow, after breakfast decided we'd drive  into Southwold.  It was sleeting and freezing cold, Dave suggested we have a walk onto the pier, I thought he must be joking but he wasn't, well wrapped up off we set. By the time we got to the cafe I couldn't feel my face, a hot chocolate helped me warm up before we set off for a walk along the front and a very quick look at the shops, we bought a couple of birthday cards and a coat for Betsy. All this time it was sleeting, after not a lot of debate we decided to go back to the hotel pack our bags and check out. The hotel were really generous and we didn't have to pay a cancellation charge, we  will definitely be returning to Satis House when the weather is better.

We were so glad we left Suffolk when we did because it snowed and snowed on Saturday evening from about 6pm,  I looked out of the window at 3 am on Sunday it was still snowing, a deep covering for us!

Betsy has been enjoying the snow, she just cant keep her nose out of it!

Despite trying to keep her ears turned down they continue to stay pointing up so nature has won and I've decided not to weight them anymore. Her ears were weighted down with a sort of blue tack stuff that the breeder suggested, it didn't hurt her at all.  But it seems unfair to her to continue doing it,  I think she looks cute whether her ears stick up or not.
Posted by Miriam Weaver at 21:23 3 comments: